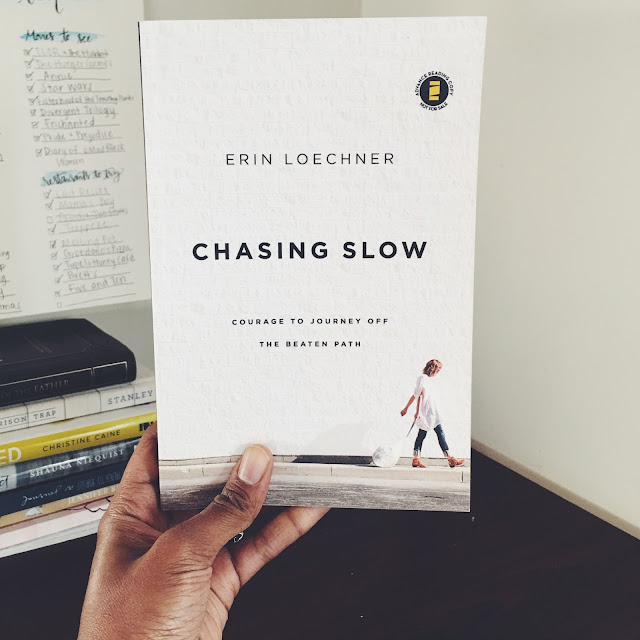 So friends, I love Erin Loechner. I heard her speak at The Influence Conference a couple years back and was so challenged and encouraged by her ability to speak so eloquently and vulnerably at the same time. She spoke in a way that allowed everyone in the room to feel as though they had a seat at the table and a place to process their life in light of reality-not in a comparative sense or with unrealistic expectations, but with grace.

Erin is an accomplished woman in every sense of the word- she's a highly capable mom to two, a former HGTV show host, and a seasoned blogger. And yet in Chasing Slow: Courage to Journey Off the Beaten Path, she paints a picture of an everyday woman who sometimes gets it right and sometimes gets it wrong. She explains how fame and money became idols and allowed bitterness and anger to creep into her marriage. She explains how she struggled in her relationship with God and how she's still just learning to know Him more. She explains how her entrance into motherhood wasn't completely seamless and how that's ok. And she explains how it's ok to not be ok.

There are so many dog-eared pages in this book and so many highlighted and underlined passages that I might as well have just highlighted the whole dang thing. It's that good. She writes about her experiences with honesty and invites you into her story by helping you to own your story. Erin is approachable and witty, fun and classic. Her words are soothing and challenging, and as I read this book, I found myself wanting to self-examine and think through the way I make decisions and the perspectives I hold that influence my thought processes and the way I treat others. Turns out that our thought processes can heavily influence the way we treat our friends and family. So if our thoughts stink, our words and actions probably do, too. It's much easier to lash out against someone else instead of taking the time to work on whatever's bothering you. Erin challenges the reader to think about what's going on inside of you and asks: how can you address it to help you be who God's created you to be?

What might God be asking you to surrender over to Him? Let's live with open hands, friends. It's easier said than done, but it's so worth it.